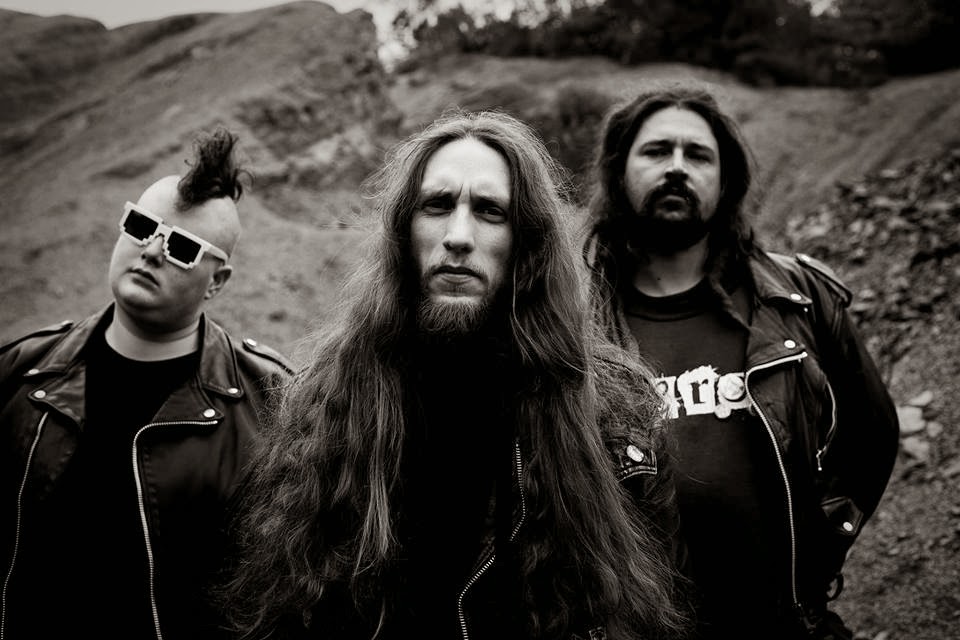 1.Can you give us an update on what is going on with the band these days
Hi to you and your readers! The band is working on newer songs and prepares a new live set. The drummer who played on our upcoming album "Regression Process" was just a session guy. We already had two years of line up variations and we couldn't wait more to record these songs. Thrash Metal is not so popular around our home place, it's a real problem to find serious drummers who got this kind of balls. We finally found somebody who looks really dedicated to Zoldier Noiz, for he is participating actively to the composition process. He deserved his picture on the album even if he 's not playing physically.

2.You have a new album coming out this year, can you tell us a little bit more about the musical direction of the new recording and also how does it differ from your previous releases?
It's always frustrating to answer that question because of the delay between composition and  release time of the album. I have to talk about our 3 years old new musical direction haha! Happily for your readers Zoldier Noiz is not a schizophrenic band. I would say "Regression Process" is a pushed to max version of "Schizoid Reject". We recorded in 3 days songs that we were fed up to rehearse with different people since three years. More violence, faster tempos, sinister parts, bulldozer bass, improved solos, more raging vocals. Some mistakes in the production due to to the fact we were in a hurry, but noise and chaos both come this way right? It's less a party album as the previous one i think. I was a bit fed up with being considered as some kind of Motorhead rip off! We were younger and without care for future issues during our first LP times, just hanging out, getting drunk and high. This new one sounds less fun i think.

3.What are some of the lyrical topics and subjects the band explores with the newer music?
Topics are mass manipulation, freaking out in a bunch of people, history lies, paranoia, betrayal, deception, mankind collapse, loss of riot instinct, anger toward manichean hypocrisy, the will to reach new dimensions...


4.What is the meaning and inspiration behind the name 'Zoldier Noiz'?
I think it comes from the movie Full Metal Jacket with that huge stupid dude freaking out at the beginning. In the french translation the instructor calls him "soldier whale". I am some kind of noisy person, i suppose i would have been the "soldier noise"... I couldn't choose a band name like Witch violator or whatever... i knew there would be only one this way. The "Z" looks cool visually, i mean for our logo. Making war with noise, nothing mysterious behind it...


5.What are some of the best shows that the band has played over the years and also how would you describe your stage performance?
We had a lot of fun playing and partying with bands like Children of Technology, Nunslaughter, Korgull the Exterminator, Mercyless, Affliction Gate... throughout all these years... We couldn't play as much as i wished because of the line up shit all the time. Don't expect live perfection with Zoldier Noiz. We play exclusively for sincere people who come to shows to feel the vibe,having fun, get crazy and forget all daily shit. We can't satisfy people  complaining about everything, having seen every band thousand times, coming just to criticize and spit on your music without any respect for all the dedication and involvement it costs to play thrash metal in 2014. We play fast, loud, dirty with full energy.


6.Do you have any touring or show plans once the new album is released?
We have a couple of shows here with E Force, Temple of Baal, Manzer and a small tour in Spain during May.


7.On a worldwide level how has the feedback been to your music by fans of extreme metal and crust punk?
I am not going so much on forums, blogs... i hate these playground talks about who's more underground or true...so i don't know exactly what is the feed back. I suppose it's not so bad cause i don't have so much copies left from our first album, demos are sold out... Guys from different countries ask for trade, some even pay haha! People like our gigs generaly. Fenriz made us some promo with his band of the week stuff. Dark descent and Unspeakable Axe are supporting us now so it looks like we are still in the race.


8.According to the metal archive page some of the band members are involved with other musical projects, can you tell us a little bit more about them?
Exept myself none of them are classical metal heads. Gaz Max (bass) comes from french underground Crust HxC scene with bands like Destroy Buster or Human No. He's got a  straight, sincere and strong personnality. Anton Obitz (drums) also plays with the Sonic Angels (excellent punk rock 69 style with psychedelic parts) and From The Basement (some kind of depressive independant rock). He lives on another dimension but he's a real savage animal behind the drums. Both of them need to express rage feelings and like my songs i think. I play also in Alien Deviant Circus also (some kind of industrial Black Metal), we gonna release an album through Necrocosm Productions...soon i think.


9.Where do you see the band heading into musically during the future?
We gonna keep the same way but working to create more and more our proper world, sound and concept, that's my wish.


10.What are some bands or musical styles that have had an influence on your newer music and also what are you listening to nowadays?
My influences are the same since i am playing that music. I got tons of favourite bands... Bolt Thrower, Entombed, Repulsion, Deathstrike,Discharge, Autopsy, Voivod, Order From Chaos, Hawkwind, Motorhead, Nuclear Assault, GG Allin, The Stooges... Do you need more?!!!  These last years there are more and more good bands comparing to the end of the 90's with the sympho black metal goth crap... Obliteration, Morbus Chron, Repugnant, Incarceration....even with this doom sludge trend there are fucking great bands. I spend my time and money going to shows, we even organize gigs there with my girlfriend... Therefore i always paid attention to keep distance being a fan and a band leader. I never wanted  Zoldier Noiz to become a melting pot of every style in my records collection. We play thrash metal.


11.What are some of your non musical interests?
We like art in general, movies, paintings, astronomy, nature, travels, history, economy...i like to keep an eye on the world we live in, therefore i despise it. I don't want to die poor an idiot.