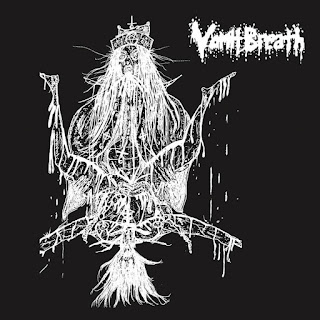 Vomit  Breath  creates  another  recording  that  remains  true  to  the  brutal  and  old  school  death/grind  style  of  previous  recordings  while  still  also  having  a  touch  of  crust,  d  beat and  noisecore,  the  production  sounds  very  dark,  heavy  and  old  school  while  the  lyrics  cover  death,  gore,  mutilation,  sex  and  horror  moves.

Posted by OccultBlackMetal at 3:30 PM No comments: 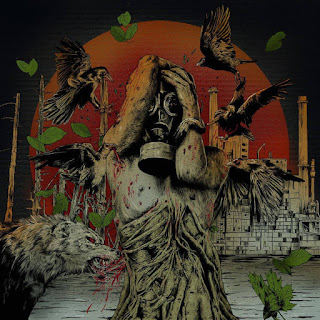 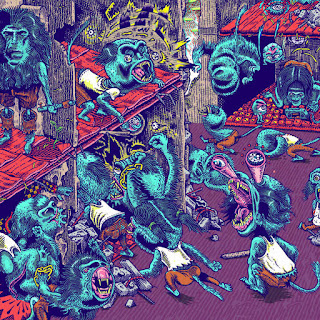 Drum  beats  and  a  heavy  guitar  sound  starts  off  the  album  along  with  some  melodies  being  utilized  at  times  and  after  awhile  spoken  word  samples  are  added  onto  the  recording  which  also  leads  to  a  faster  musical  direction  that  also  utilizes  blast  beats,  high  pitched  grindcore  screams  and  deep  death  metal  growls.

Ape  Unit  takes  a  musical  style  that  takes  the  rawness  and  aggression  of  crust,  hardcore,  grind  and  power  violence  and  mixes  it  with  the  melodic  structures  of  noise  rock  to  create  a  style  of t heir  own,  the  production  sounds  very  professional  for  being  a  self  released  recording  while  the  lyrics  cover  humorous  themes. 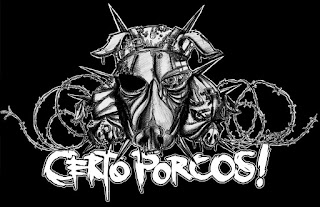 Rodrigo: We are a War Metal Punk band formed in 2010 founded by old friends with the sole purpose of making extreme heavy music. We recently recorded our first album through COGUMELO RECORDS/GREYHAZE RECORDS. It is entitled Ódio 666.

2.You have an album coming out in October, how would you describe the musical sound that is presented on the recording?

We don’t like labels because we believe in freedom of expression. But our references come from heavy music and all its branches. To make it simple, we can say that it is Crust with that traditional Brazilian vibe.

We make ourselves free to talk about everything, but on this album we approached the realm of intolerance and hate. It’s the perpetuation of hatred within humanity (Ódio 666). Which means hatred raised to the six hundredth and sixty sixth power. As if it were a periodic repetition that never ends.

4.What is the meaning and inspiration behind the name 'Certo Porcos'?

CERTO PORCOS! It is an expression that we used within the band. It does not have a specific meaning. But it does relate to the book “Animal Farm” by George Orwell.

We have been playing here in our home state of Minas Gerais. We’ve played a lot of gigs and fests. The interesting thing is that we have free transit in a lot of different shows, be it Punk or Metal. The best shows have been opening for VOIVOD in Belo Horizonte and another one with the mighty OLHO SECO. Both gigs were brutal. We try to be simple and direct in our shows, without anything fancy, etc. It’s very intense and energetic show.

6.Do you have any touring or show plans once the new album is released?

Without a doubt, the idea is to play more and in different places, since our live show is way more intense.

7.On a worldwide level how has the feedback been to your music by fans of metal and punk?

Up to now, the response couldn’t have been better. The album is doing very well working with COGUMELO and GREYHAZE.  We recently released a lyric video for the song “Hate Never Ends.” It is giving Certo Porcos more visibility.


8.Are any of the band members also involved with any other bands or musical projects?

I am now rebuilding my original WAR METAL band HOLOCAUSTO with the original lineup of the compilation album WARFARE NOISE, from 1986. We’re really happy with this return. We already have 5 songs and are preparing ourselves to play live soon. I also play with BODE PRETO, which is a Black Metal band. We are finalizing the new album, which will be probably called Mystic Massacre. Our drummer (Lelio Metralha) is currently playing with SEPULCHRAL VOICE, which is a Death/Thrash Metal band.

I hope that we continue playing more and playing better and always producing heavy music. It is a basic necessity in my life just like eating and breathing. I’m a tormented guy and I need to make music every day of my life, otherwise I can become ill. At the moment we’re working on a split album with the band AGATHOCLES. It will be simply brutal!

We are from the old school and we continue listening to the ancient Rock, Punk, and Metal bands. We also listen to classical and Avant Garde musice. We can mention: HELLHAMMER, VOIVOD, SLAYER, EXTREME NOISE TERROR, DISCHARGE, RATOS DE PORAO, ANTI-CIMEX, OLHO SECO, ETC.

What really interest me outside of music are arts in general. Movies, music, and books can’t really change the world but they can certainly create a new world. Other than that I’m into sports as well.

We’d like to thank you for the giving us this space and allowing people to get to know us better. We also want to say that in the rotten systematized and bankrupt world, there is nothing better than screaming until your vocal chords burst and your eardrums bleed. Extreme music is really an alternative to create another reality, which is not as dead as the one we live in. SALUTATIONS!

Posted by OccultBlackMetal at 9:18 PM No comments: 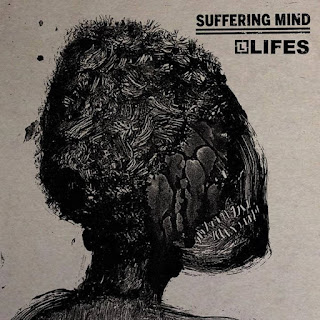 Posted by OccultBlackMetal at 11:00 PM No comments: 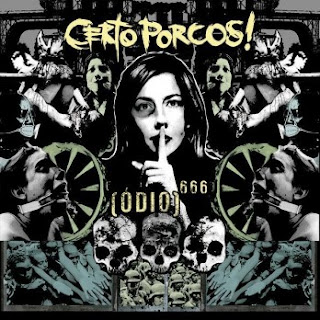