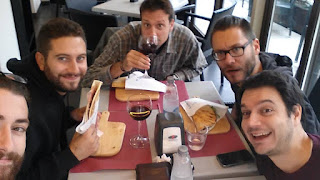 After the recording of "Turd", which was held in February, we've been quite busy: we have continued with our live activity around Italy but at the same time we had to deal with all the red tape linked to production of the release.
After the well-deserved summer vacation, we have taken over the programming of the dates to support the upcoming EP .

Pretty tough question ... even though our roots are definitely those of grindcore, we've never placed real limits regarding our style! Compared to the previous one ( Unforgivable Holidays, out in 2012), this new album is definitely a big step forward, the structures of the songs are more complex and fast, but I think our style always remains at the forefront!
All five members of Ape Unit have a  quite different musical background, and this helps a lot in well-mixing different music styles in the songs. Indeed, in the new EP you can find pretty much everything, from punk to post-hardcore, from black metal riffs to the Caribbean chords, believe it or not.

As you've probably  understood, we don't like to take ourselves too seriously, and our lyrics are representative of this thought!
We mainly focus on the choice of the song title, which is usually inspired by the tide of jokes and bullshit that we exchange and  say every day and then Marius, our singer, deals with the actual content of the lyrics. He's kinda good in creating great surreal and hilarious stories!


4.What is the meaning and inspiration behind the name 'Ape Unit'?
Ape Unit was an invented band that some of the founder member use to talk about when they heard ugly songs playing. For example at the bar "What's this shitty music on the radio?" "It's Ape Unit.". It was a joke. After some time when we met to play some grindcore tunes together we chose that name to make it real.

When we attend an extreme-music gig as fans we hope to see an energetic show that turns people wild and leave them with no energy left, so that's exactly what we try to give to our audience when we are above the stage! That's kinda hard doing it playing our instruments properly! Anyway we can not tell how our own live performances are, you should ask someone who's not in the band ahahaha!
We've made many great show during the past years, so It's hard to say...we remember the gig in Trutnov ( Czech Republic) the day before Obscene Extreme in 2013 : the venue was quite small but It was packed with crazy people that literally destroyed the place.
That was really stunning, It was the first gig outside Italy with the actual line up, and we were stoked to get such a feeling from the people.
By the way, Obscene Extreme Fest, the day after, and Go!Fest in Rome last year were both incredible gigs, we all have great memories of them! There was also a secret illegal show we played in the nature with trees by our side in 2008 or 2009! That was magic!

Currently we have some concerts planned around Italy , including the GOTR Fest in Rimini and a gig supporting Whoresnation. Unfortunately for now it won't be easy for us to play outside our borders , but we are trying to book a minitour in December!
We have already been contacted by several people who have asked us to play in their country , and would be great for us to present TURD outside Italy ! We'll see!


7.Can you tell us a little bit more about the record labels you worked with on the new release?

The release has been co-produced  by many different labels! Uterus Productions, Here And Now Records, Zas Autoproduzioni, Distrozione, Don Carlos Productions, Tadca Records and Vollmer Industries : except for Uterus Prod, which is based in Germany, the others are all independent DIY labels from Italy, great supporters of our music and our project!
WE suggest everyone to check them all out, because they're  producing tons of good material from awesome bands around the world, and they absolutely deserve to be supported at 100%.

8.On a worldwide level how has the feedback been to the newer music by fans of power violence and grindcore?

Based on the two preview we have released so far , and considering that TURD has been release a few days ago we can say that we are extremely impressed by how the audience reacted ! We received many positive feedback not only from Italian fans but also  from people all over Europe and even from America!
Now that the album is out, we’re really looking forward to know what people think about it!

9.When can we expect another full length and also where do you see the band heading into musically during the future?

We are currently writing new material for a split with an awesome British band which should come out in 2016. I can not yet reveal details about it but I can assure you that it will be a real blast!
Other than that , we hope to have enough material to make a new album as soon as possible, but it is difficult to predict when this will happen !

10.What are some of the bands and musical styles that have had an influence on your newer music and also what are you listening to nowadays?

We are deeply influenced by grindcore and post hardcore, but as I've said before, everyone of us like to put his main influences into the songs : that's why you can find lot of dissonant riffs as well as death metal and hardcore parts!
There are too many bands which have influenced our style...above all I can say Napalm Death, Brutal Truth, Charles Bronson, Converge, The Jesus Lizard...the list is waaaaay too long!!


11.What are some of your non musical interests?
Girlfriends, gigs, booze, reading, movies. We're normal people.


12.Before we wrap up this interview do you have any final words or thoughts?

Thanks a lot to  DoomtoGrind Webzine for giving us the chance to make this interview!
If you want to be updated on what we're doing, follow us on Facebook at https://www.facebook.com/noisefromthejungle
we want to play live for you so write us!!! Cheers!
Posted by OccultBlackMetal at 10:59 PM No comments: