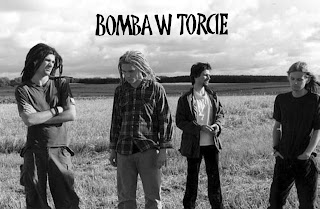 BWT was formed around 1995, as side project of our main group Stuck On Ceiling. It supposed to be band we having after hours of our serious one.  Swapping instruments we got quite new band. We started to do it just for fun, however after sometime Bomba started to have more songs and actual concept of it.

2.Recently your 1998 demo was released as a full album, can you tell us a little bit more about the musical style that you went for on this recording?

We never considered this record as demo, it that time the only possibility to release album was to put it on cassette, at least for us. So actually that was first release of that album. Our music went from experience we already had, StuckOnCeling played complex mixture of noise metal hard core. We wanted Bomba to be simpler and more song oriented but also we wanted to move it closer to grind core than noise. On other approach there were also interest to keep music various, so we did tracks which are a little different from each other.

3.All of the music was originally recorded in 1998, what was the decision behind releasing the music nationwide instead of writing another full length?

Main reason was that we stop to play around 2000, and we did nothing up to 2017, no single bang.
It was few questions from some labels about reissuing of Anarchia 666. So we decided to remaster it and put it out. This album has returned to us in various situations, it got some great feedback, even after so long time, so remastering and reminding  it made perfect sense. We reunioned as trio of Jondro Perkoz, Partner Sowy and Rurokura, so we had to find guitar player fitting our personal and musical criteria. And we did now new member of Bomba is Sony Bumm. The other reason was that with 2018 Anarchia 666 got 20 years old.

4.The band split up 18 years ago, can you tell us the decision behind disbanding?

It happened mostly because personal situation for most of us changed a lot and we could not really continue the band. Very late years of previous Bomba keep us occupied in other musical activities, as musicians we were in deep transformation so BWT lost a bit of our attention.  SOC already played very experimental material and me started to play a lot with other musician on improvised and noise scene. Disbanding happened with no special decision or date.


5.Can you tell us a little bit more about the lyrical topics and subjects the band explores with the music?

I mentioned that Bomba has some concept behind, so it is mostly related to its lyrics. Most of them are connected with Doktor Jelito, who is some kind of demiurge, prophet or leader who defines our political and social manifestos as well as poetry. Most of lyrics are ridiculous, ironic or quizzical.  Some of them tell short story, some says about certain hero like Czarny Anarchista (Black Anarchist) or Cyborg. General proposal of Doctor is to cleanse world from mankind as they causing a lot of wrong and disgrace, that is the final punch line. However nothing sounds so literal and colloquial. Meaning is a core, but form makes it essential.

6.What is the meaning and inspiration behind the name "Bomba w Torcie'?

Bomb in the birthday cake. That is our first songs we ever made. Lyrics is about how members of BWT were organizing birthday party for millionaires kids. BWT buys birthday cake in anarchist bakery, and there is bomb in the cake. It is funny in its macabre output, war between anarchy and capitalism is a little subversive here.

7.Can you tell us a little bit more about the artwork that is presented on the album cover?

That picture is taken from very old work of Poma de Ayala “El primer nueva corónica y buen gobierno” which is generally history written by de Ayala about Spanish colonization in Peru. Front cover show spanish conquistadors torturing Inca person. Hammer and machete is also taken from this chronicle. This book was made for king of Spain, but it never reached his eyes. Photos are done by Anna Zaradny – who is also musician and visual artist, she was member of late line up of StuckOnCeiling – during funeral of her uncle. I guess he was polish but I am pretty sure he has something to do with spanish conquistadors.


8.What where some of the best shows that the band had played in the past and also how would you describe your stage performance?

I think our best shows happened in Katowice and Szczecin, especially last show - before our long break - which took place there was very special. Our performance is not very different from you can expect going to see hard core metal band, we do not have disguises nor make up, no props, videos, just us making air vibrate. To be honest we do not know how it looks. I forgot to add we have no dancers on stage, but we wish to employ small crowd. Nobody ever like when we play so most probably we should pay audience to be more touched.


9.On a worldwide level how has the reaction been to your music by fans of grindcore?

This is a mystery to us, we had not too much feedback on worldwide level, there was some great opinions but really few. It changed a little now with reissue release, we got some  good opinions. Social media also influenced Bomba to spread at some point. It has to be said  that our present record label Selfmade God is great to make our music more recognized.

10.Are there any plans for any newer music in the future?

We planed reissue with reunion together to continue Bomba as existing and creative band. Last year we come back to rehearsals but also to write new music, Most of material for new album is already done, we need to finish few pieces and work on final shape and brilliancy of performance. Would be great to record some demo sessions this winter and do proper album recording in 2019.

11.What are some of the bands or musical styles that have had an  influence on your music and also what are you listening to nowadays?

It is not easy to say, I am not sure if any bands has any influence on us now. In 90'  when Bomba started we already had rich experience which grown from hard core, trash metal and grind towards noise rock, jazz or electronic music. We loved and still do icons as The Accused, Rorschach, early Corrosion of Conformity, Obituary, Brutal Truth etc but in Bomba days this we were not influenced by specific band or bands, rather overall experience of playing and listening to music did BWT style.
Nowadays... impossible to speak plural, we listen to various music, as musician and composer I am on very different aesthetic since years. So I listen to some music relating to BWT but also to wide palette of contemporary experimental music.


12.What are some of your non musical interests?

I think reunion was inspired by non musical interests. World as perfect example of realization of hell concept is pretty inspiring. Starting from family to killing millions in gas chambers. It is common to say that single person is good, but politicians, government, institution etc are wrong and evil. Most of human needs causing suffering and destruction. There is almost nothing good in existence, culture and arts is good - if we are not talking about production of things to sell, but experience which is actually something which makes the only difference. We are also interested in modern tendencies of theories from various areas, so says Doctor we need to keep our eyes open to not stay behind future. Our project of stopping mankind spread can't turn into archaic banal.


13.Before we wrap up this interview, do you have any final words or thoughts?

Thank you for your questions.

Posted by OccultBlackMetal at 5:46 PM No comments: