1. Can you give us an update on what is going on with the band these days?

Well the final preparations for the abum promotion are on the menu for the last several weeks. The usual stuff, radio and magazine interviewes, booking concerts and so on.

2. How would you describe the musical sound of the new album and how it differs from previous releases?
I think that the sound on our new album is quite different from the sound we had on our
previous records. It is a natural progression from our previous album Songs of the Lost. The songs are darker and more heavier than on the previous records and there are a lot of male vocals on this one. The thing that makes it unique to our discography is that this record is guitar oriented. Not that the violins and keyboards are not represented on this recording, but the main focus is on the guitars. We wanted it to sound very organic so we didn't use the modern and overused methods of production like re-amping, dubbing the guitars or using digital effects. It's just the band playing with our own gear! So the album has a really live sound to it. This album also marks the return of the flute in our sound, which was absent for the past few records, and of course there is a new vocalist whose performance is quite amazing.

3. What are some of the lyrical topics and subjects the new release explores?
I always write songs about the things that happen to me and things that affect me in my life. This album as whole is basically a chronological diary of some major events in my personal life. It talks about the events that happened in the period of the last few years. I used a lot of  double meanings, synonims and equivocations, but in the end they are all true stories. Since life has a tendency to serve bad things and those come in clusters, the lyrics on this record have an overall dark feel to them. I used all the bad energy that the modern life offers you and wrote this really dark and personal album. The experience was in one word chatharsic. So The Cure for Happines was a perfect name for it.

4. What is the meaning and inspiration behind the bands name?
The band was formed back in the 95' under the strong influence of the British doom metal bends. It was the golden era for doom metal, My dying bride; Anathema, Paradise lost and Cathedral were on the peak of their careers. As all fans, the band members at that time were also highly influenced by their musical idols so when time arose to name the band; we chose the name Ashes you leave as homage to a song from Cathedral's „The Ethereal Mirror“album. The name of the song also had a personal meaning and it was perfect for a young doom band.
5. What are some of the best shows that the band has played so far and how would you describe your stage performance?
It's hard to choose a single show from a seventeen year long career, but I can name three. The first one was back in 2004. on the Metal Female Voices festival in Brussels. We played a lot of festivals before but all those were open airs.  This was the first time that we played in front of a crowd this big in an arena. It was breathtaking, scary and one of those moments that you remember your whole life. The second was Brutal Assault festival in Jaromer in 2009. All big open airs are great shows but the hospitality and the kindness of the festival promoters in Czech Republic has jet to be paralleled. In the end we stayed for four days there and we had a blast. The last but not the least was  a club gig in our home town in Rijeka. It was in 2009, it was the promotion of our Songs of the Lost record and it was simply great! Really personal and emotional.
As far as the performance goes, we try to fit in as many songs as we can. We have six records now and almost all our songs are quite long so we just try to make the best possible set list that in the same time promotes the new album but also includes a song from each of our records. This is impossible on festivals since the time is always limited but we try to make the best of it.

6. Do you have any touring plans for the new release?
There are always plans, but in these times there are no certainties. We will start promoting our record in December but at this point in time there are no plans for major touring. You'll be able to see us in the festival season next summer all over Europe.

7. Currently you are signed to Rock 'N' Growl Records, how did you get in contact with this label and how would you describe the support that they have given you so far?
We finished our record on the 30th of December 2011, that was our last day in the studio. As soon as it was done, with the help of our manager, we started looking for a new record label. There were a lot of offers, a lot of negotiations, but since the times have changed, the majority of these were about if we were willing to pay the label and how much. We have released five records in our career and we have been around since '95 so we thought that four our 6th record we have to have an honest and  fair record deal. This is when our manager stepped in. His name is Axel and he is also the owner of the Rock N Growl Records. In the time he has been managing us he became a real partner of the band and our friend. So we recieved a really fair deal and as far as the promotion is concerned he is working his ass off for us. We are really happy with how we have been treated so far.
8. On a worldwide level how has the feedback been to your new album by fans of doom and gothic metal that have heard it so far?
So far we released only one new song, Summers End, and the response so far was great! There are a lot of people that are following us, they'we been waiting for three years for a new record, and reaction was overwhelming. We are really humbled by the kind words and praises. They accepted our new vocalist, Giada, straight away and generally I think that everybody likes the new sound of the bend. The media recieved our record in advance, for promotional purposes, and the reviews have been more than positive. Every day we are getting requests for interviews and reviews from all over the globe and I think there is a big interest for this record.

9. What direction do you see your music heading into on future release?A few years ago we signed an endorsement deal with a Polish guitar and bass manufacturer called Mayones. We recieved three completely custom instruments that were made to our specifications. The major difference from our previous instruments is that we switched to seven-stringed guitars. A lot of the music, and sound a band has, is influenced by the instrument he plays. So a big portion of this record was solely inspired by these amazing new instruments that we have. As for the future, I think we will explore even deeper the possibilities that the new tonal range offers us. In the end there are four of us writing the music, Berislav, Marta, Matija and myself, so everything is possible. One thing is certain we won't limit ourselves with genres as long as we feel the music we write. Dark and heavy are the guidelines.

10. What are some bands or musical styles that have influenced your newer music and also what are you listening to nowadays?
To tell the truth there are seven of us and in between we are listening everything from classical music to extreme death metal. Personally I don't like to listen to music when I'm writing it just gets in the way. I still listen to a lot of doom metal both new and old, old gothic and some more extreme bands as well.

11. Outside of music what are some of your interests?
We all work in the band so our main activitiy, beside working, is Ashes You Leave. Bero and Marta have a baby girl together so they are busy juggling between parenting, working and being in a band. As for myself, when I have the time, I love mountaineering, traveling and cooking.

12. Any final words or thoughts before we wrap up this interview?I would like to thank you for this interview and the chance to introduce our band. To all the readers; we have a new album coming out on november 29 via Rock N Growl Records so check it out.
Keep the doom flame alive!

On behalf of Ashes You Leave,
Luka Petrovic

Posted by OccultBlackMetal at 12:33 PM No comments: 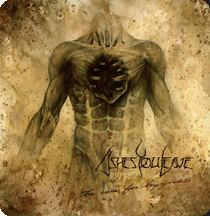 Vocals  are  mostly  clean  singing  female  gothic  metal  vocals  with  some  harsh  sounding  whispers  and  deep  death  metal  growls  being  thrown  into  the  music  at  times,  while  the  lyrics  cover  dark  and  depressing  themes,  as  for  the  production  it  has  a  very  strong,  powerful,  heavy  and  professional  sound  where  you  can  hear  all  of the  musical  instruments  that  are  present  on  this  recording  with  some  of  the  songs  being  long  and  epic  in  length.