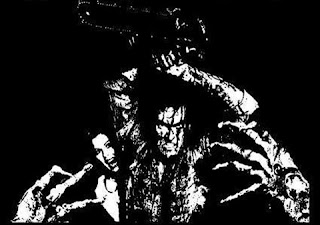 1.For those that have never heard of you before, can you tell us a little bit about the band? well the band was first created by myself (jon) and my friend chris in late 2005, we were bored teenagers that had a strong passion for crust/grind so we decided to start brucexcampbell, the first day of its creation we wrote about 5-7 songs and played our first show in east los angeles. Over the year's it has had different members, now we evolved to a 4 piece chaos grind band, rolo-drummer, juan-bassist, jeffrey-vocalist, me-guitarist/vocalist.

2.How would you describe the musical sound that is presented on the recordings? our style of grind is untraditional, it has some groove to it, along side with some sluggish hate, with alot of fearsome blast beats.

3.What are some of the lyrical topics and subjects the band explores with the music? the lyrics range from past experiences in life,to udder disgust with humanity, and what it has become.

4.I know that the band is named after the actor of the same name, can you tell us a little bit more about your interest in his movies? well they are goofy, funny, and unexpected those are the best one's.

5.What are some of the best shows that the band has played so far and also how would you describe your stage performance? most of our best show's i'd have to say were backyard shows, filled to the end's of the yard and just the vibe of them were very overwhelming, waves of bodies splashing against one another those were the best one's. stage performance... we try our best to not play on stage's, we mainly just put all our energy and passion into playing our instrument's, that is what we love.

6.Do you have any touring or show plans for the future? we plan to play california deathfest this year in oakland, very stoked on that. We also recently got added to maryland deathfest. Our mind's mind's were blown after we received the news, so we might set up mini tour when we had to maryland.

7.So far you have been a part of a few splits, can you tell us a little bit more about the bands and labels you have worked with on these recordings? well  both of our splits with green terror and pyogenic cystclot were released by eli from bloody scythe records. He has helped us out alot can't thank him enough, he's also releasing another split for us soon. The band's that we did the split with great guys and amazing grind band's !

8.On a worldwide level how has the feedback been to your music by fans of grindcore? the feedback has been great, but i hear people have been wanting more from us, which we have alot of music but we've all been stuck in a rut for a while. Now that we all have our feet ground we'll be releasing alot more music for the world to destroy their ears.

9.Where do you see the band heading into musically during the future? hopefully evolving even more into a beast of grind, like we have been for close to 10 year's now.

10.What are some of the bands or musical styles that have had an influence on your music and also what are you listening to nowadays? well for me band's like dahmer that started me off than dystopia i love dystopia! insect warfare, mesrine, but for the other band member's we all have different taste our drummer for over 7 years now just barely started getting into grind i'd say a year or 2 ago, and he's a beast on drums! haha. What i listen to now still the same band's some crust his hero is gone, tragedy, remains of the day, agathoceles, the afternoon gentlemen, impaled, haemorrhage, warsore, list goes on as i am attempting to haha.

12.Before we wrap up this interview, do you have any final words or thoughts? keep the grind alive, stay rooted, and hail to the king.
Posted by OccultBlackMetal at 12:52 AM