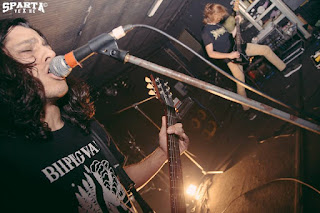 Sure we can! Ahaha anyway.. We've just came back from our first European Tour with our mates Zeit. We are planning to record a couple of new songs in order to understand how they sound in the near future. We will also play two shows, We are playing at the Groove Studio Party in Lughignano (Treviso - Italy) on December 23rd and in Schio (Vicenza – Italy) on January 15th with Hierophant (Season Of Mist), Zeit and Cioran.

2.In November you had released an ep, how would you describe the musical sound that is presented on the recording?

In my opinion it could be defined as Hardcore which sounds Metal with Grindcore influences. But it is not too easy to describe it precisely, many reviews have written that our sound has more Black Metal and PowerViolence influences than Metal or Hardcore.

3.What are some of the lyrical topics and subjects that the band explores with the music?

Very good question. Left To Starve had been thought as a Concept Ep based on the human experience of death in many different situations and the reflections it concerns. Then when I write down some lyrics I try to tell a story.. so, like a novel.

4.What is the meaning and inspiration behind the name 'The Mild'?

Finding the band name was a real pain in the neck. We tried with many names but they finally end up not to convince us and sometimes they were already used by other bands. We figured out that situation by chance calling our band "The Mild" which probably reveals a position between good and evil.

Some of the best shows we've played so far can be both shows we played in Czech Republic during our European Tour. We played the first at the Klub 007 in Prague with Birds In Row (Deathwish) and we were very thrilled to play with them. The second show was in Olomouc where the people who attended there got crazy and we lived one of the most insane situations so far.
Throughout our stage performance we try to create an atmosphere with feedback's and delays, then We aim to reach the audience with the song intensity.

We are planning to come back to Europe in July or maybe August, then during the next fall too.

7.Can you tell us about the many different labels that had helped you release your ep?

We succeed in releasing Left To Starve thank to 9 different labels, divided between tape format and vinyls. The ep has been released in vinyl by Assurd Records (Italy), Zas Autoproduzioni (Italy), 5 Feet Under Records (Denmark), Rip Roaring Shit Storm (Uk) and Crust Or Die Distro (Brazil). In addition, I Want To Believe Tapes (Italy), Dullest Records (Usa), Vleesklas Records (Belgium), Epileptic Media (Austria) had co-produced all the tapes with the 5 Feet Under and Rip Roaring Shit Storm help. Every label we dealt with has been friendly, pleasant and accepted our conditions and timetable.

8.On a worldwide level how has the feedback been to your music by fans of grindcore?

We are glad that our music reached Brazil and United States. We played through Italy, Germany and Czech Republic during our first European Tour and we had a good response from the audience. We haven't recieved a great amount of reviews about our Ep so far but those we got were positive.

9.When can we expect a full length and also where do you see the band heading into musically during the future?

We're now writing new songs and yes, you can expect a full length. We don't know when but it will surely be recorded. We are going to maintain the Left To Starve sound with more noisy parts maybe and we have a couple of new long songs (for our average ahaha) so the Lp could be made up of "long songs". However, I think that our future record won't be so different.

I remember when I was playing and writing the first riffs for this band and I was paradoxically really interested in the Entombed and Eye Hate God sound. So these two bands had a great influence on me and my guitar riffs.
I'm very keen on noisy music and metal but The Mild is a three member band and each one listens to different bands and genres. From Hardcore to Grindcore, from Crustpunk to Metal. It's probably for this reason that the stuff we play is a mixture of different genres.

Thank a lot for you patience. Hope to see you sometimes, somewhere.
Fuck Music, Make Noise.

Vanny Piccoli – The Mild
Posted by OccultBlackMetal at 9:23 AM