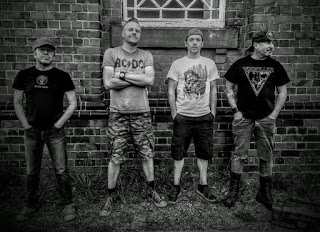 1.For those that have never heard of you before, can you tell us a little bit about the band?
1)  Yes, Pray U Prey started when Simon G from the band Suicide Watch. And Me (Shrew, Prophecy Of Doom/Alehammer) Had a jam over some beers, i really liked his riffs and i wanted to write new lyrics again for songs, so we got Shrub (Prophecy Of Doom/Alehammer) on bass. And Colin (Suicide Watch) on drums.

2.So far you have released an ep and a full length, how would you describe the musical sound that is presented on both of the recordings?
2)I think there's a good mix of blast beats, grindy stuff and hard core punk riffs too, We have remixed the EP tracks, and put them on the end of the Figure the 8 cd. It's got a good production as we recorded at the excellent studio 6 near Swindon, U/K.

3.What are some of the lyrical topics and subjects the band explores with the music?
3)I write the lyrics, and for me it's carrying on from ideas i've had with Prophecy Of Doom, How our ego minds are destroyed through mental forced unwanted conditioning by those in power/money.How we confuse our own feelings for emotions, which are also used against us, by the same people, ie-sales techniques/fear of anything. How religions have stolen the way out of our insanity, through teaching more mind based dead ends. in short, we all have an awareness which is heart based, and works via self intuition, through a balanced logic/feeling certainty. my lyrics try and cover view points from this angle.

4.What is the meaning and  inspiration behind the name 'Pray U Prey'?
4)Pray U Prey to me sums up the mindset of most asleep people, while we collectively destroy our selves and the world.

5.What are some of the best shows that the band has played so far and also how would you describe your stage performance?
5)We have not done many live gigs so far, but the one that stands out for me was playing at the Common Ground Festival last Summer, great people and cause.We play tight and fast!

6.Do you have any touring or show plans for the new album?
6) Yes we hope to play gigs this year, some good festivals would be nice.

7.On a worldwide level how has the feedback been to your music by fans of death metal, grindcore, and crust?
7)We are just starting to get feed back from our first LP, We are very happy with it, and hope people will question things more if they find the lyrics interesting.

8.What is going on with some of the other bands or musical projects these days that some of the band members are a part of?
8)Si and Colin hope to record a new thrash metal LP with their other band Suicide Watch, while Shrub and me are getting ready to meet Karl (ex-Impulse Manslaughter) and Scoot (Doom) for some Alehammer fun later in the year!

9.Where do you see the band heading into musically during the future?
9)More of the same i think, but from a slightly different angle of the same subjects (if that makes sense!) We hope to record an 7" EP later in the year, then another LP in 2018.

10.What are some of the bands or musical styles that have had an influence on your music and also what are you listening to nowadays?
10)Si and Colin love most hard metal/punk bands. Shrub loves Killing Joke and Slayer, i love most crusty metal and Japanese noise bands.

11.What are some of your non musical interests?
11)Pubs! Gigs,meeting new people. being in my garden!!

12.Before we wrap up this interview, do you have any final words or thoughts?
12)Sometimes to go forward, you have to go back. From circle to spiral, figure the 8.
Thanks for your time.
Posted by OccultBlackMetal at 7:56 PM