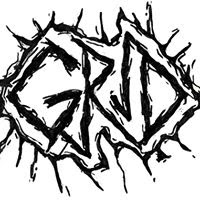 1.For those that have never heard of you before, can you tell us a little bit about the band?
Well, we are a two pice grindcore band from the north of Sweden. Started in 2014 by Me (fredrik), Andreas and Wilke (who left the band in 2016)
We started out as a kind of a fun partygrind band but over the years we have found our sound and have gotten allot more serious.
2015 we got signed with Discouraged Records.
We have released one demo, 2 EPs and one cassette.

2.How would you describe the musical sound that is presented on the recordings?
Our music is dirty grind combined with raw d-beat. Influenced by bands like Nasum, Rotten Sound, Butal Truth, Skitsystem ect.
We want the to keep the music real and sounding like we do live so there is no super editing on the recordings.

3.What are some of the lyrical topics and subjects the band explores with the music?
Misanthropical lyrics raising the topics about how sick our planet is and about the end of mankind (cus it's near)
We are against religion, racism, nationalism and that's also reflected in our lyrics.

4.What is the meaning and inspiration behind the name 'Grid'?
Haha well I came up with the name after a few beer's. It sounded almost like grind and when I think about grid I associate it whit big fences keeping us in place.

5.What are some of the best shows that the band has played so far and also how would you describe your stage performance?
Well Obscene Extreme Festival 2016 was of course epic for us but beside from that show our release show in our hometown, Umeå, for our first ep was crazy!
The performance is intense and I think people can find us a bit rude in a fun way.

6.Do you have any touring or show plans for the future?
We are going on a Southeast Asia tour in July this summer.
And a few shows here in the north of Europe in the winter.

7.The new ep was released on 'Discouraged Records', are you happy with the support that they have given you so far?
Yeah, they are great and it's nice to work with, and support, a local label.

8.On a worldwide level how has the feedback been to your music by fans of grindcore?
We have only gotten positive feedback so far. Our focus with the music isn't mainly speed so I think it's easy to listen to, both for grind fans, punk's and metalheads.

9.Where do you see the band heading into musically during the future?
I think we will polish the melodical parts more and also make at least one more slow song (so I have time to breath live)

10.What are some of the bands or musical styles that have had an influence on your music and also what are you listening to nowadays?
As I said earlier we are influenced by Nasum, Rotten Sound, Brutal Truth, Skitsystem, Regurgitate, Infanticide.
I listen to allot of different genres. Right now I listen to allot of skatepunk and black metal but it's varies with genres from week to week.

11.What are some of your non musical interests?
I like to fix with my car and I love my Job as a welder at the Opera house in Umeå.

12.Before we wrap up this interview, do you have any final words or thoughts?
Well I can say that Me and Andreas have this band just cus we love the music and we like to play together.
We don't have any rockstar ambitions and we won't change anything about our music. We play what we want to play and if someone else likes it thats a +.
/ Fredrik 'Frongo' Larsson - Drums and Low Vocals.

Posted by OccultBlackMetal at 10:10 AM