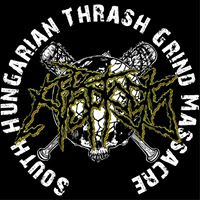 We started the band during the fall of 2015. Attila play on the bass, Dávid is our guitarist, Peti is our screamer, and I am Dani the drummer. Dávid is the guitarist of the Gravecrusher Death Metal band, and he also takes part in the Alcoholic Terror named thrash, where Peti is the vocalist, and I am play in the grindcore band, called Jack. We wanted to cross these styles.

2.Recently you have released an ep, how would you describe the musical sound that is presented on the recording?

Fast, rough and dirty. We intend to play intense music, and we reach this goal by mixing the impetus of grindcore and thrash metal genres.

The lyrics are speeches against the human race, whereupon we look at with a great disgust. Some tracks anatomize the topic of environmental pollution, others the animal test, corruption, and so on.

4.What is the meaning and inspiration behind the name 'Apoptosis'?

The apoptosis means natural cell death. We would like to refer to the continuous destrucion of our world, and we're trying to draw attention for that.

We haven't played in many places, but the best show was in Subotica. The crowd was awsome, they really know there how to party.
During our short shows we always try to play are songs at least as intensively as you can hear on the album.

First we will go to Budapest and then travel a mini-tour in Serbia and Croatia. In this fall we will also visit the Czech Republic and Poland during a tour. And next year we are planning to go on a big European tour.

7.The ep was released on Neverheard Distro, are you happy with the support they have given you so far?

Of course I am, but I hope we will find another records who publish our Ep on vinyl.

8.On a worldwide level how has the feedback been to your music by fans of grindcore and extreme metal?

Yet we have got only positive feedbacks from everywhere, and we are a bit suprised about it.
This also motivates us for the making of the further materials.

9.Where do you see the band heading into musically during the future? *

We feel that there are a lot of things in which can develop, but the way is unambiguously has been determined by the first album.
We will record 6 more songs in August for a split or EP. These songs are very similar to those, what you can hear on the debut,
but this will be a bit more mature material than the first.

When I have time I go to outside into the nature, and hike, climb mountains with my friends (far from the people), and I like spending time with my animals also.

If we're playing near to you, come and see us, you won't regret it!
Anyway you can find us also on facebook, but if you are not registered on that shit, you can write contact us through email: apoptosisthrashgrind@gmail.com
Thank you for the opportunity!
Posted by OccultBlackMetal at 1:31 PM