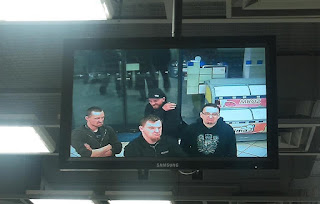 1.For those that have never heard of you before, can you tell us a little bit about the band?
we started on 2012. had some line up problem / changes but finally we are 4 piece - all vegan / vegetarian: me (Edi on vocal) Jedras on guitar, Rafi on drums and Gavlish on bass.
all of us was or still are involved in other bands: Apatia, Sophie Scholl, Bunder Nekromunda ... we have released 1st album in 2013 on CD/LP and various tape runs. right now our 2nd release is in pressing plant.

2.How would you describe the musical sound that is presented on the recordings?
what i always wanted to avoid is to play just one specified music style. i think all of us in a band have a same feeling. we listed to different stuff and we have lot of different ideas. i'm not sure but based on reviews we're getting i think we have achieved it somehow. some people says we play grindcore, some crust and some other that we play hardcore or metal. so its still heavy and they way we like it but not monotonously (i hope hehehe). we don't care about how someone calls it as long as we enjoy playing it.

3.What are some of the lyrical topics and subjects the band explores with the music?
i think most of the lyrics are just reflection of what happened or is happening in our lives, in our thoughts. some of them are anti fascist, some of them are pro animal cause those movements are very important to us. and some are just filled with negative thoughts that i just wanted to get rid from myself. i sing in polish language but there is a translation on our bandcamp so you can check it :)

4.What is the meaning and inspiration behind the name 'Herida Profunda'?
its very hard to avoid loadwords from Vitamin X song hehe but i think its something more. this name (Herida Profunda = Deep Wound in Spanish) is a good reflect to our band: fast, deep cut that leaves irreversible damages hehehehe. I wish this applies to both: musical and lyrical layer.

5.What are some of the best shows that the band s payed so far and also how would you describe your stage performance?
its hard to tell which gig was best one. we love to play shows and every show is different and special in some kind. we've played in few "strange" or unusual places like old tank factory in a middle of forest of squatted public toilet and that was great experience, but we also love to play in small clubs on diy shows where there is no stage and you are very close to people. we try to keep our gigs as intense as possible, shorts songs, short brakes and short set so it's not boring for receiver and also leaves some kind of deficiency, hunger for more :)

6.Do you have any touring or show plans for the future?
i have moved to uk and rest of a band still lives in poland so we don't play as often as we used to. right now we're waiting for new release: picture disc split with Hellbastard and we will play together in September in Poznan / Poland on Rozbrat Squat. it will be 2-days, anniversary festival done every year there. this year it will be 21 years of this amazing place - its the oldest squat in Poland. this show will be also our release party.
then we will have a short brake with shows due to private issues of our drummer. we plan to appear in few festivals and play 1 or 2 tours in 2016. 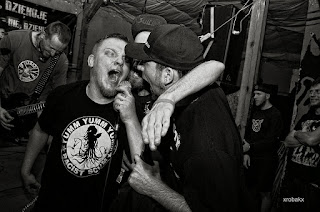 7.Can you tell us a little bit more about the labels that have helped you release your music?
I run small DIY label called 783 Landsberg Hardcore Crew just for HxP needs. We have released CD version of our first album. LP version was released by 8 labels. we had some problems due to working with very irresponsible guy who runs No Sanctuary Records but after all all labels got their copies and was happy. there is a various limited runs of tape version of this material all over the world. we try to get limited tape release wherever possible.
Split with Hellbastard is also DIY cooperation between 14 labels.

8.You have a split coming out with Hellbastard, how did you get contact with this legendary band?
i just asked if they want to release split with us :) ...Originally it supposed to be split with Besthoven. we have talked with Fafao about this long time ago but finally it didnt work out and that was a reason of huge delay with releasing this material. we needed to find a split partner cause we already had our songs recorded and labels ware confirmed. i wrote to several bands that i know or just like. Malcolm from Hellbastard sayd "why not".
All labels was very happy about new split partner and now picture discs are in pressing plant :)

9.On a worldwide level how has the feedback been to your music by fans of crust and grind?
I think it's ok. There is lot of people in Asia that like our facebook profile heheheh.

10.Where do you see the band heading into musically during the future?
We are, always been and will be DIY band. We have plans for UK tour in 2016, we will play few nice festivals. Split with Hellbastard will be out soon so we will focus on sending this everywhere and promote it. We dont know what future brings, but as long what we do makes us happy we will carry on.

11.What are some of the bands or musical styes that have had an influence on your music d also what are you listening to nowadays?
There's lot of bands that we listen. When i was young i listen to metal music only, same as Jedrek (guitarist) and I think in new songs You can hear some Slayer style riffs. I personally listen to lot of different styles of music. I'm big fan of Nick Cave for example :) currently i have Weekend Nachos and The Afternoon Gentlemen and new Doom album in my player non stop.

12.What are some of your non musical interests?
I'm involved in antifascist immigrants group in UK called Dywizjon 161!. Jedrek lives on Rozbrat Squat in Poznan and runs recording studio and print screen workshop there. Gavlish is involved in new left wing organization in Zielona Gora /PL. I love to travel so when I'm not traveling with band, i try to travel as much as possible with my fiancée.

13.Before we wrap up this interview, do you have any have any final words or thoughts?
Thanks for interview. Check out our bandcamp for free streaming / download of our 1st LP and some songs from next release and facebook for news and showdates. 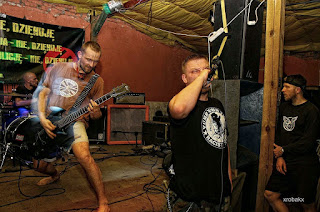 Posted by OccultBlackMetal at 12:49 AM