1.Can you give us an update on what has been going on with the band since the recording and release of the new album?
Since NEANTIFICATION’s release we’ve played a lot in Europe, Turkey, and festivals, all we wanted and more than we expected, we’re actually in a really good mood. We also had a lot of fun during two euro tours with our friends Insomnia Isterica  in June and with Unsu in late August.

2.During the end of 2013 you had released your new album, how would you describe the musical sound of the newer music and also how does it differ from the stuff you have released in the past?
The new album is more accurate and worked than the first one. We’ve tried to record it in a more natural way, without metronome, so we kept the live dynamique. This album is closer of what we play on stage. This time, Mak did the mix and the great Dan Swano the mastering.

3.What are some of the lyrical topics and subjects the band explores with the newer music?
We talk about issues in every day life, about what we think scary and stupid in humanity, how we hate spending time in our jobs, how we hate selfishness, glory, shitty actions and activities on social network, how we have good friends, how a love story can be violent but no one cares about it (based on true story), how we're unlucky on the road with our car problems…

4.What is the meaning and inspiration behind the name 'Warfuck'?
Nothing about hippies like “fuck war, make love” or nothing about “make war, it’s total chaos”
It comes from a Nasum’s song, written by Anders, called Warfuck which deals with women raped during wars as well as children who are born of it.
This is what our new t shirts represent.

5.Currently there are only 2 members in the band, are you planning on expanding the line up in the future or do you chose to remain a duo?
Less is more! We’ll keep this way, only 2 guys, it’s easier and there is less problems. Even if some times it’s not easy to fill big stages like 6 member's bands but we do our best.
If we wanna have a “real full line up”, we’ll do another project, Warfuck is 2 guys.

6.What are some of the best shows that the band has played over the years and also how would you describe your stage performance?
Our gig in Ankara (Tr) was probably the most intense. It wasn't legal, a lot of people came and it was tough inside the pit. The crowd fell on the drums three times and a man opened his forehead on Nico’s guitar, it was perfect!

7.Do you have any touring or show plans for the future?
Actually it’s only projects, as lazy guys we’re not really into planning in advance but we’ll do another SuperBestFriends Tour with Chiens, Whoresnation and Doomsister, and we’ll try to play in some new countries where we’ve never been, maybe a new continent and maybe with a really cool band we’ve met on the road… nothing confirmed yet, we’ll see. 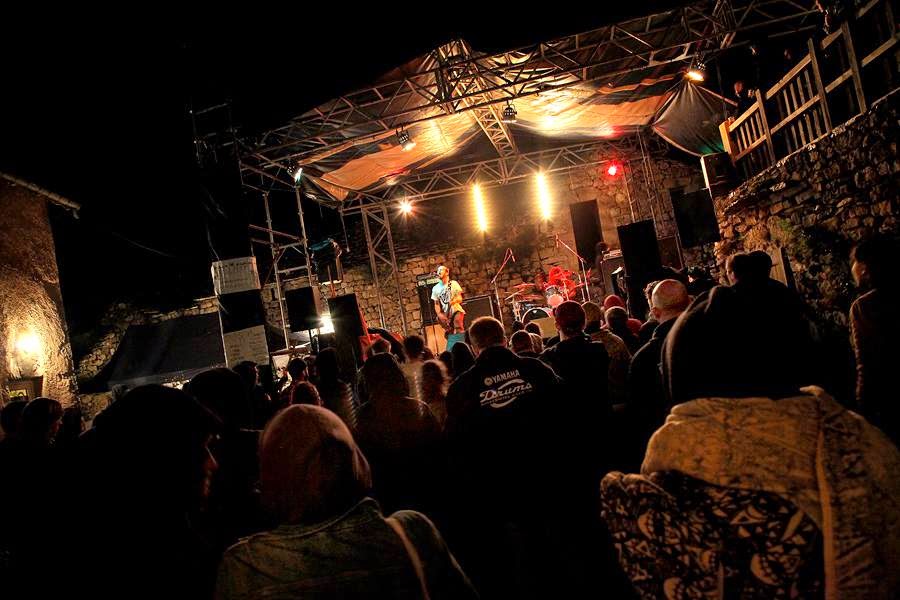 8.The new album was mastered by Dan Swano, do you feel honored this metal legend was a part of your new album?
Yes, it was awesome to work with him, he’s very good and it’s also very easy to work and exchange with him. Even if I was a little bit stressed because i made the mix and I’m a pure noob without knowledges.
9.On a worldwide level how has the feedback been to your newer music by fans of crust and grindcore?
It looks good, we had nice reviews mainly thanks to you Andy. It seems people more knows our name and like the new album. We’d rather play than to know if we have more “likes” on FB, so if we have new shows booked, it’s a good feedback for us.

10.Where do you see the band heading into musically during the future?
As I told you, we’re not planning in advance, a good example is the difference between the 1st and the 2nd album. We like to mix grindcore with some different kinds of music we like, so you’ll find some hardcore, black metal, brutal death, punk parts and maybe more.
It’s gonna be fast, close to grindcore and then we’ll see if the weed is good and if beers are strong enough.

11.What are some of the bands or musical styles that have had an influence on your newer music and also what are you listening to nowadays?
We’re listening to a lot of punk rock on the road, for both of us it’s a big part of our influences. We also discovered a band that we really like called Youth Avoiders, it’s not grindcore at all but it’s awesome.
I (Mak) like to listen some hardcore stuffs like Terror or Wolf Down.

12.What is going on with the other musical projects these days that some of the band members are involved with?
We’ll release a new album with Obnoxious around September, our thrash death metal project where Mak plays drums and I’m bassist, and with Lovgun, my crusty fastcore project as drummer, we’ve release a new split the Norwegian from Higgs Boson.
As for Warfuck you can find all our music on free download on the internet.

13.What are some of your non musical interests?
Work, grind, booze and friends… That’s our life since the beginning of Warfuck. Even when we’re not playing, we book shows in Lyon FR when it’s possible or we go to see some friends in some other shows.

14.Before we wrap up this interview, do you have any final words or thoughts?
Thanks for all you’ve done for us since we met you and thanks to all the people, friends, bookers, bands we met and who make our lifes really more interesting.

Posted by OccultBlackMetal at 7:25 PM